Treatments for cannabis use disorder

Treatments for cannabis use disorder

Cannabis use disorder (CUD) is defined as a pattern of continued use despite clinically significant impairment or distress.1 Among US adults reporting past-year cannabis use, anywhere from 9 to 31% are estimated to have CUD, depending on the survey methods.2,3 Although cannabis use has increased by nearly 18% over the past decade,4 few individuals receive treatment for CUD.5

Psychotherapeutic treatments for CUD are the most well-studied, and evidence supports some approaches.

The goal of CBT is to teach individuals how to identify the circumstances and triggers that promote cannabis use, develop coping skills to prevent return to use, and pursue alternative behaviors.3

The role of MET is to enhance motivation by providing nonjudgmental, patient-centered feedback and engage participants in goal setting, as well as discussing and resolving ambivalence.6

CM is only used as an adjunctive behavioral-based treatment. It uses operant conditioning to target and encourage certain behaviors, such as abstinence, through negative urine drug screens.12

Several studies have explored the efficacy of treatment strategies that integrate both CBT and MET, as well as contingency management.

Few studies have been conducted on the use of other psychotherapies such as relapse prevention, multidimensional family therapy, mindfulness meditation, drug counseling, and social support. There is  little existing evidence that these interventions affect treatment outcomes.5,15

To date, there are no pharmacotherapies that are routinely used for the treatment of CUD, none are FDA-approved for this purpose, and existing data on all medication classes is incomplete, with few methodologically rigorous trials.16-18

Psychotherapeutic treatment remains first line for the treatment of CUD in adults and adolescents. Although the optimal duration and combination of treatments is unknown, existing evidence suggests that the most consistently supported intervention for CUD is a combined approach of CBT, MET, and potentially abstinence-based incentives.15 The ability to treat patients with psychotherapeutic interventions for CUD is dependent upon the availability of mental health professionals trained in treatment of addiction. If access to treatment is an issue, any psychosocial treatment available is preferable to no treatment. No pharmacological agent has been found to be clinically effective for CUD. Further longer-term and methodologically rigorous trials of promising pharmacotherapies are needed in order to conclusively determine their efficacy. 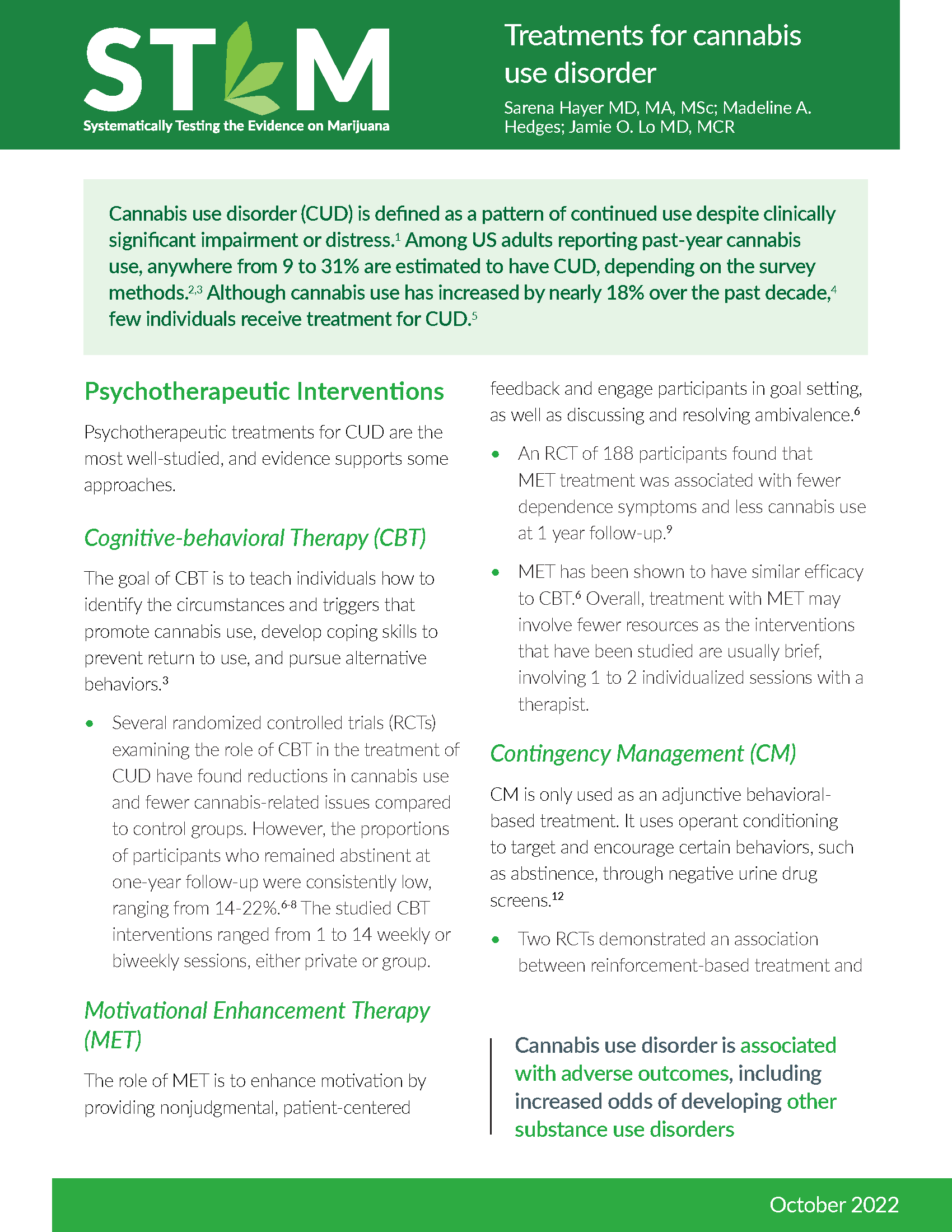